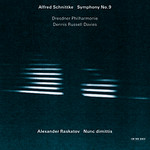 Composed shortly before his death in 1998, Schnittke's ultimate symphony - actually his very last work - is a "Ninth" in a most unusual sense: Put down with a shaky left hand by an artist who had survived four strokes and was laterally debilitated, it is an impressive triumph of spiritual energy over physical constraints.

The composer's widow Irina treated the barely-legible manuscript as a testament and was long doubtful whom to entrust with the difficult task of deciphering and reconstructing the highly expressive three movements for large orchestra (some 38 minutes of music). She finally settled on Moscow-born Alexander Raskatov, who not only provided a thorough score but, convinced that Schnittke had intended to write a fourth movement, also developed the idea to add an independent epilogue, the "Nunc Dimitis" ("Lord, let thy servant now depart into thy promis'd rest") for mezzo soprano, vocal quartett and orchestra. It is based on the famous text by orthodox monk Starets Siluan and on verses by Joseph Brodsky, Schnittke's favourite poet. Both pieces were given their first performances in the Dresden Frauenkirche in summer 2007 by the musicians of this world première recording which feautures long-standing ECM protagonists the Hilliard Ensemble and conductor Dennis Russell Davies.