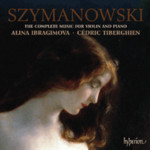 "All in all, this repertoire should be high on the priority list for all those interested in 20th-century violin music, and it's not easy to imagine a stronger case being made for it than here." Gramophone Magazine, July 2009

"…this is a performance that shows Ibragimova's art at her remarkable best; at one moment poised, the next playing with abandon, she is one of the most expressive violinists around. The beguiling Three Paganini Caprices and with variations on that tune (composed 16 years before Rachmaninov's treatment), and give both players a chance for virtuosic display." BBC Music Magazine, June 2009 *****

"Alina Ibragimova has become Hyperion's violinist of choice for sensual-esoteric 20th-century repertoire, and she and the super-sensitive Tiberghien make a winning combination… All in all, this repertoire should be high on the priority list for all those interested in 20th-century violin music, and it's not easy to imagine a stronger case being made for it than here." Gramophone Magazine, July 2009

"Here, Alina Ibragimova and Cédric Tiberghien produce beautifully characterised accounts, whether in the veiled contours of the Nocturne and the explosion of rhythmic energy that follows it in the Tarantella, or in the refined exoticism of Mythes, with its strange mixture of classical evocation and sensuous indulgence." The Guardian, 29th May 2009 ****

"Alina Ibragimova wields her intoxicating violin with Cedric Tiberghien's dappled piano in the febrile splendour of the Polish master Szymanowski. Just when you're ready to faint after the early Violin Sonata, his Three Paganini Caprices arrive, dazzling us with Ibragimova's light touch and the duo's wonderful ability to move as one. More characteristic is Mythes - music of mysterious portent and idiosyncratic beauty." The Times, 9th May 2009 ****

"We are living in a Second Golden Age of violinists, but even in the context of Hilary Hahn, Leila Josefowitz and Julia Fischer, Alina Ibragimova is an astonishing talent … technically the playing is superb. Intonation is exceptional, and Ibragimova's timbral range-from the coarse to the silken, from the richly throbbing to the chastely disembodied-seems unlimited. The music is studded with challenges … she tosses it all off with self-confident authority … this is a major release" International Record Review

This disc contains some of Szymanowski's most overtly sensual and vividly gestural music; his lush, exotic textures intensified and crystallized in miniature.

From the early Violin Sonata in D minor onwards, evidence of the composer's unusual brilliance in writing for solo violin is paramount. The Romance in D major Op 23 (1910), first performed in Warsaw in April 1913, already reveals a considerable advance towards the exotic, strangely inward exaltation of mature works. In the extraordinary Mythes (1915) Szymanowski reaches the zenith of his artistry, creating 'a new mode of expression for the violin' and through this an intoxicating, other-wordly musical language.

This recording features the wonderful young violinist Alina Ibragimova, who appears on her third Hyperion disc. Her growing catalogue is receiving the highest critical acclaim. Accompanying her is an equally youthful yet highly distinguished performer, the French pianist Cédric Tiberghien.