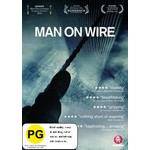 An amusing & engaging look at tightrope walker Philippe Petit's daring, but illegal, high-wire routine performed between the New York City, World Trade Center's twin towers in 1974. This documentary plays like a heist film, with as much anxiety & daring going into planning as the feat itself. You'll laugh, gasp and shake your head with amazement at Petit's stunt, often referred to as "the artistic crime of the century"!