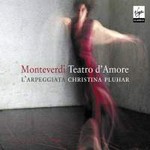 Founded in 2000, L'Arpeggiata is a French-based ensemble directed by Austrian-born harpist and lutenist Christina Pluhar. Its members, some of the leading European soloists in their field, join forces with exceptional singers from the worlds of baroque and traditional music. The group's particular focus is on French, Italian and Neapolitan music of the 17th century and it works with often daring instrumental improvisations, exploiting rich textures created by blending a variety of plucked instruments, and a vocal style influenced by traditional music.

"The gorgeous singing of the soloists and stylish instrumental performances, though dazzling and gimlet-eyed, are also elegant and respectful without being obsequiously slavish to convention." BBC Music Magazine, May 2009 ****

"the sound they make is gorgeous, lush in texture, with splendid performances from soprano Nuria Rial and countertenor Philippe Jaroussky...Like the vocalists, the instrumentalists of L'Arpeggiata perform with an affective sincerity that is undiminished by clarity of articulation." BBC Music Magazine, May 2010 ****