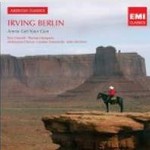 "All credit to McGlinn and the London Sinfonietta for turning what could have been just another musical into something so very special. Seventy-nine minutes of pure, unadulterated pleasure. Not to be missed." (MusicWeb Dec 2009)

"One could argue that Hampson doesn't sound rough enough as Frank, or that Criswell has the opposite problem, but taken as a whole this recording is still a resounding success. All credit to McGlinn and the London Sinfonietta for turning what could have been just another musical into something so very special. The recording is fine, but the booklet is a bit skimpy. To be fair, though, that's pretty much what you'd expect at this price point. Seventy-nine minutes of pure, unadulterated pleasure. Not to be missed." (MusicWeb Dec 2009)

Annie Get Your Gun is a 1946 musical with lyrics and music by Irving Berlin from a book by Herbert and Dorothy Fields. The story is a fictionalised version of the life of Annie Oakley (1860-1926), who was a sharpshooter from Ohio, and her husband, Frank Butler.

The 1946 Broadway production was a hit, and the show had long runs in both New York and London. Songs that became hits include "There's No Business Like Show Business", "Doin' What Comes Natur'lly", "You Can't Get a Man with a Gun", "They Say It's Wonderful" and "Anything You Can Do."

This Abbey Road Studios production was made in 1990. Two years later Kim Criswell was to head a London West End revival at the Prince of Wales Theatre.

The Sound of Leonard Bernstein