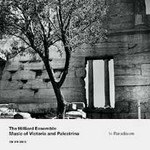 VICTORIA / PALESTRINA
In Paradisum: Music of Victoria and Palestrina
The Hilliard Ensemble

"In Paradisum" combines music from three sources: the Officium Defunctorum of Victoria, polyphony by Palestrina and Gregorian chant from a 17th century manuscript. Placing the work of the Spanish and Italian religious composers in a historically "authentic" context, the Hilliard Ensemble also give us a sense of the overwhelming musical experience that the Catholic Mass was at the time of the Renaissance.

"The Hilliard's previous recording for ECM included a fine performance of Lassus's four-voice Requiem of 1580; this series of motets from the Office for the Dead by Lassus's greatest continental contemporaries represents something of a logical continuation. The liturgical components of the Requiem Mass are all sung in plainchant (albeit in a modern published version rather than a 16th-century Roman source as one might expect) and interspersed with excerpts from Victoria's publications of 1592 and 1604, and from Palestrina's second book of motets. It is a coherent programme, certainly, and devotees of the high renaissance will relish comparison of the two composers' settings of the responsory Libera me. Indeed (with the exception of Victoria's distinctive Taedet animam meam that opens the disc), their styles are remarkably similar throughout; or so it seems in this repertory, in these performances." Fabrice Fitch, GRAMOPHONE.CO.UK