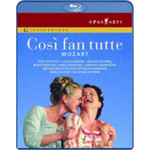 Blu-Ray 'I had to search long and hard down memory lane to recall a Così that so vividly revealed both the pleasure and the overwhelming pain of this evermore disturbing masterpiece, and I failed.' Opera

"Coupled with superb picture and sound quality, this is as good as it gets for the DVD library, so if you're in the market for stimulating theatre that will survive trends and fads, this has to be on your shortlist."
(MusicWeb July 2007)

"A couple of minutes into watching this production I realised I had at last found the cast and production I had been waiting for in this most complex of Mozart's operas - not a straight comedy, or a jocose drama, more like a bitter-sweet, sad comedy without a clear resolution. Not only does it feature a veritable master-class in Mozart singing the production is truthful and true above all to the pain underlying the ironies and absurdities of the situations. Miah Persson's liquid, radiant and deeply felt singing of "Per pieta" had me in tears, just as the finale of the first act with its ridiculous poisoning scenes had me laughing. The cast is young and sings and acts Mozart and da Ponte's masterpiece with utter conviction and the orchestral contribution of the Orchestra of the Age of Enlightenment constantly brings new aspects of Mozart's writing to the fore. Although for the most part a "traditional" production, this is not a production that suddenly has everything back to normal after the cruel tricks of Alfonso and the men have been unmasked. We feel the pain and suffering of the two sisters like in no other production I have ever seen. After the day's revelations of infidelity, mistrust, betrayal and doubt how could a conventional "happy ending" work?"
- KEITH (Marbecks)

Mozart's genius in setting to music Da Ponte's comic play of love, infidelity and forgiveness marks Così fan tutte as one of the great works of art from the Age of Enlightenment. Nicholas Hytner's beautiful new production, with its sure touch and theatrical know-how, lives up to its promise to be 'shockingly traditional', while Iván Fischer teases artful performances from an outstanding international cast of convincing young lovers. Recorded using High Definition cameras and with true surround sound.
'Dressed in shades of sand and stone by Vicki Mortimer, and bathed in summer light by Paule Constable, Hytner's period production marries elegance, farce and psychological acuity.' The Independent

'…an evening of Mozartian magic… a staging that cries out to be revisited.' Sunday Times