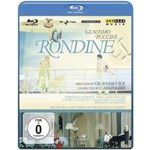 BLU-RAY - The score of the operetta-like threeact "lyrical comedy", which tells the story of the love between Magda and Ruggero, must be one of Puccini's most subtle creations.

Note: This Blu-ray Disc is only playable on Blu-ray Disc players, and not compatible with standard DVD or HD-DVD players.

Venice 2008. This year's schedule at La Fenice includes a special treat for opera-goers: a production of Puccini's seldom-performed opera: "La Rondine" (The Swallow). And now this rarity can also be rediscovered on Blu-Ray. The score of the operetta-like threeact "lyrical comedy", which tells the story of the love between Magda and Ruggero, must be one of Puccini's most subtle creations. The light, bubbling music reveals levels of artistry and complexity that few composers have ever matched. Milan-born conductor Carlo Rizzi has worked with the world's leading orchestras since 1982 - from Los Angeles and Chicago to Zurich, Milan and Salzburg, where he conducted a much-acclaimed production of "La Traviata" with Anna Netrebko and Rolando Villazón in 2005. Graham Vick, a highly experienced opera director, has directed who also is something of a "Britpop" enthusiast, has directed productions at the New York Met, Vienna State Opera, Bavarian State Opera and the Royal Opera House, London. In Glyndebourne, where he was director of productions from 1994 to 2000, he was responsible, amongst other things, for staging "Così fan tutte", "Don Giovanni" and "Pélleas et Mélisande".

Bonus:
- Meet the cast and their characters.
- All about Schläger - preparations for the fight scenes.
- Designing Il Trovatore - behind-the-scenes with the director and the costume and set designers.
- Illustrated synopsis.