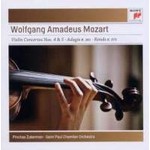 Israeli-born Pinchas Zukerman has kept his face and music before the public for more than four decades with his wide range of activities: he is a world-class violinist, violist, conductor, and administrator.

Zukerman's first instrument was the recorder, his second the clarinet. But soon he took after his father, a violinist of Polish background. By the time he was eight, Zukerman was studying at the Tel Aviv Academy of Music, and when he was 12 he moved to New York to matriculate at the Juilliard School. Isaac Stern signed papers to become his legal guardian. Zukerman studied with Ivan Galamian, the Juilliard's avatar of hardcore Russian-school playing, and was also encouraged by cellist Pablo Casals.

After jointly winning the Leventritt Competition with Kyung-Wha Chung in 1966, Zukerman began performing widely. His career as a top-flight international soloist began with his New York debut at Lincoln Center in 1969. Zukerman performed on both violin and viola, taking full advantage of the various repertoires his versatility opened up to him. He played duo sonatas and music for larger chamber ensembles, recorded the Mozart Sinfonia Concertante for violin, viola, and orchestra with Stern, and also began building a career as a conductor. Zukerman performed music from the Baroque era to premieres of new works by Lutoslawski and others. By the early 2000s, Zukerman had made over 100 recordings as a soloist, covering the entire standard violin and viola repertoire.

In 1980, Zukerman was named music director of the St. Paul Chamber Orchestra. He restored the group's financial health, oversaw a move into a new 2,000-seat theater, and made a series of recordings, both as conductor and soloist, that became mainstays of radio programming. In 1998, as his marriage to Hollywood starlet Tuesday Weld dissolved, Zukerman accepted the music directorship of Canada's National Arts Centre Orchestra in Ottawa. His efforts there encompassed unusual levels of community and educational outreach; he became a pioneer in the use of videoconferencing and webcasting technology to communicate the immediacy of classical music making. He helped launch the career of the young Russian violin sensation Ilya Gringolts; after seeing a video of Gringolts' playing that his parents had sent from Russia, Zukerman arranged for Gringolts to study at Juilliard with Itzhak Perlman and conducted Gringolts' North American debut with the NAC Orchestra. He remains internationally active as a soloist and guest conductor. ~ James Manheim, All Music Guide