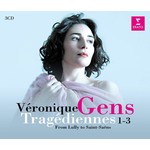 Véronique Gens is one of the most acclaimed French soprano. She has recorded in 2005, 2008 and 2011 three recitals of operatic arias for soprano from the French tragic operas of the late 17th, 18th and 19th centuries from Lully to Saint-Saëns. Véronique Gens embodies the tragic heroines of the Antiquity such as Dido, Circe, Medea or Cassandra… Véronique Gens is accompanied by renowned French director Christophe Rousset and his ensemble les Talens Lyriques. These three recitals are the most successful she has recorded, with Les Nuits d'été by Berlioz.

"Véronique Gens is now a leading interpreter of French opera and song. Véronique Gens is stunning in this recital disc devoted to tragic heroines from 17th and early 18th century operas. Embracing some, often quite rare, fare from Leclair to Lully, Gens throws herself into each role with abandon. And her voice, richer than it once was, possesses the resources to sustain her dramatic instincts." GRAMOPHONE MAGAZINE AWARD WINNER 2006: Vocal Recital (Vol 1)

"This is one of the most satisfying vocal discs, in all categories, for a long, long time. Véronique Gens seems never to have put a foot wrong these days. The recorded sound is fully worthy of the performances and there are excellent notes in three languages by Jean Duron. I don't expect to review many - if any - better discs this year and I can promise that it will be one of my selected Recordings of the Year in December." (Recording of the Month MusicWeb August 2009 on Vol 2)

"…a wonderful odyssey through late Baroque to early Romantic French opera. Gens's agile voice is the perfect vehicle to cope with these emotional extremes, from the enchanting to the chilling. She is never afraid to sacrifice pure beauty of sound in favour of rhetorical and dramatic effect, giving due weight to the plights, laments and plangent outpourings of these timeless, tragic heroines. Rousset coaxes some crack playing from Les Talens Lyriques, combining the immediacy and intimacy of chamber music with all the colours and intensity of a large-scale symphony orchestra." BBC Music Magazine, August 2009 ***** (Vol 2)

"Though many of these arias were written with a mezzo-soprano range in mind, their dark shades are generally a good match for Gens's sultry voice...Rousset directs throughout with bracing energy: rhythms are razor-sharp, orchestral colours vivid. His period orchestra never overwhelms the soloist, so Gens's every word cuts through with thrilling, and often chilling, drama. Virgin's recording sound is clean and detailed. In short, intense but compelling listening." (BBC Music Vol 3)