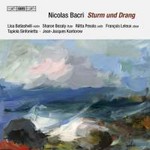 This highly accessible, colourful and melodic music is here interpreted by the Tapiola Sinfonietta under Jean-Jacques Kantorow, a team whose previous recordings on BIS have been enthusiastically received by the reviewers. A disc of works by Saint-Saëns was for instance described as 'a smorgasbord of distinctive orchestral colours' in Classic FM Magazine and was a finalist in the Gramophone Awards 2007.