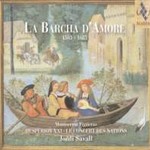 "…there's a surprising homogeneity of sound and style throughout - testament to Figueras and Savall's innate musicality, artistic vision and spiritual harmony in a lifetime of collaboration and discovery." BBC Music Magazine, September 2009 ****

La Barcha d'Amore is an eclectic, contrasting selection of some of the most beautiful vocal and instrumental music inspired by mythology and 17th-century European love poetry. Music of time and memory, performed by Montserrat Figueras and Jordi Savall, together with Ton Koopman, Hopkinson Smith,Andrew Lawrence-King and other members of the ensemble Hespèrion XX (which in 2001 became Hespèrion XXI) and the orchestra Le Concert Des Nations, have selected recordings that they made from 1976 to 1996 for the labels Emi Electrola, Dhm,Astrée and Auvidis, and from 1998 to 2008 for Aliavox. This anthology, contains vocal pieces directly related to the theme of love, such as the innovative Airs for the recitar cantando of Giulio Caccini's Le Nuove Musiche, the evocative tonos humanos by Spanish Baroque composers Sebastián Durón, Juan del Vado and Juan Hidalgo, Monteverdi's sublime Lamento della Ninfa, the mysterious folia Yo soy la locura by Henri du Bailly, not forgetting the touching Elizabethan lullaby and the tender melody Une jeune fillette, both by anonymous authors, but equally remarkable for their great beauty and depth of emotion. The various instrumental pieces, with such evocative titles as the Gaillarde "La Barcha del mio Amore" by Giacomo de Gorzanis, Samuel Scheidt's Pavane and his "Courant dolorosa", the Elizabethan "Desperada" and the highly popular improvisation piece, "Greensleeves", as well as the great Jean-Baptiste Lully's Rondeau from Le Mariage forcé and the Chaconne from L'Amour Médecin, provide the necessary complement to the vocal pieces, resulting in a great variety of sources and contrasting characters. The Barcha d'Amore is the personal testimony of Jordi Savall's unwavering and rigorous commitment to the performance of music from the Middle Ages to the age of Classicism using 'historically informed' instruments and performance techniques, which emerged in the 1970s.Those years marked the beginning of a great revival in the performance of pre-Romantic music, a continuing revival which offers the possibility of retrieving an important cultural legacy.