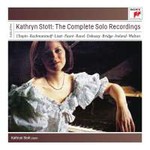 "Atmospherically recorded and enchantingly played, Stott excels in the magical inflections of the Sonatine and Le tombeau, while ensuring that the ghoulish grotesquerie of Gaspard de la nuit is suitably dark and menacing." BBC Music on Ravel

A natural collaborator, Kathryn is greatly in demand for chamber music alliances, playing with some of the world's leading instrumentalists, as well as appearing on major international concert platforms in recitals and concerto performances. She has also directed several distinctive concert series and festivals and has built up an extensive and exceptionally varied catalogue of recordings.

Born in Lancashire, she studied at the Yehudi Menuhin School with Vlado Perlemuter and Nadia Boulanger, then at the Royal College of Music in London with Kendall Taylor. In 1978 she attracted critical attention as a prize-winner at the Leeds International Piano Competition. In addition to her busy career as a performer, Kathryn is visiting professor at both the Royal Academy of Music, London and Chethams School of Music, Manchester.

As a concerto soloist she enjoys associations with major orchestras in Britain, the Netherlands, Germany, Italy, Spain, Switzerland, France, Hong Kong and Australia, and she recently toured Japan with the Orpheus Chamber Orchestra. Among her chamber music partnerships, she has long-standing musical relationships with cellists Yo-Yo Ma, Truls Mørk and Christian Poltéra, with violinist Janine Jansen, and pianist Noriko Ogawa. She has also collaborated with the cellist Natalie Clein and - on the borders of, and beyond, the classical arena - she has developed shared musical interests with the guitar-playing Assad Brothers, bandoneonist Nestor Marconi, double-bassist Edgar Meyer, and the legendary clarinettist Paquito d'Rivera. A close involvement with many leading string quartets has led to regular guest appearances with, amongst others, the Belcea, Skampa and Endellion Quartets, as well as The Lindsays, in whose farewell concert series she was invited to appear.