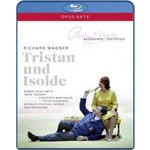 G - 'In Tristan the standard of conducting and singing is high. Peter Schneider draws seamless playing from the orchestra, contouring Wagner's long arcs of sound as only someone of his experience can do.' The Financial Times

Recorded live at the Bayreuth Festival in July & August 2009, this production marks the beginning of an exciting new long-term partnership between the Bayreuth Festival and Opus Arte. The prestigious music festival takes place each year in northern Germany in a theatre that Wagner himself personally supervised the design and construction of. The festival has become a pilgrimage destination for Wagner enthusiasts, who often have to wait up to ten years to obtain a ticket! Katarina Wagner, the great-grand daughter of Richard Wagner, is currently codirector of the festival together with her sister Eva Wagner-Pasquier.

Tristan und Isolde was first performed in 1865 and provided inspiration to many composers including Mahler, Strauss, Szymanowski and Berg. It is widely acknowledged as one of the peaks of the operatic repertoire, and has been performed regularly since is premiere. This production, by renowned director Christoph Marthaler, stars leading Wagner exponents Robert Dean Smith and Irene Theorin in the title roles, supported by the Bayreuth Festival Chorus and Orchestra conducted by Peter Schneider.

'Peter Schneider conducted with real feeling for the score and the prelude to the first act stole upon the ear with the magic of Bayreuth's amazing acoustics. Robert Dean Smith is now a fine Tristan with a really beautiful voice. …Robert Holl made a moving King Marke, his magnificent bass nobly used. Some of the most beautiful singing came from Clemens Bieber's Young Seaman at the beginning.' The Stage

'In Tristan the standard of conducting and singing is high. Peter Schneider draws seamless playing from the orchestra, contouring Wagner's long arcs of sound as only someone of his experience can do. Iréne Theorin and Robert Dean Smith make a well-balanced couple - she all temperament and sound, he emotionally neutral but vocally flawless.' The Financial Times