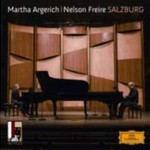 "This is a souvenir of what must have been a special evening at the Grosses Festspielhaus; but it's also so much more than that. To hear two musicians of this stature at the height of their re-creative powers is never less than thrilling and thought-provoking, an gratitude is due to DG for thinking to travel down from Hamburg with their microphones to capture the event in such realistic sound."
Gramophone Magazine - Disc of the Month (December 2009)

Two of the world's legendary pianists join forces in a virtuoso recital program with Johannes Brahms: Variations on a Theme by Joseph Haydn, op. 56b, Sergey Rachmaninov: Symphonic Dances, op. 45, Franz Schubert: Rondo in A, D 951-Grand Rondeau and Maurice Ravel: La Valse-Poème choréographique. The concert will be taped live at the Salzburg Festival and includes the Schubert Rondo in A, D951 which has never been recorded by the artists before.

"Martha Argerich is arguably the most mercurial of all great pianists today, capable of being compellingly inspiring" International record review "I'd say that Martha Argerich is the greatest living performer . . ." BBC Music Magazine

Brahms:
Variations on a theme by Haydn for two pianos, Op. 56b 'St Anthony Variations'

Sound the Trumpet - Royal Music Of Purcell And Handel