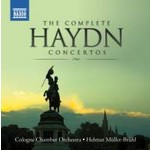 "All are new recordings, underpinned by warmly stylish accompaniments by the Cologne Chamber Orchestra, spiritedly and sensitively directed by Helmut Müller-Bühl. If the Trumpet Concerto (still the finest for this instrument, and brilliantly played here) stands out, the splendid D major Cello Concerto, HobXVIIb/2, is also superbly presented by Naxos's star cellist Maria Kliegel, who then goes on to give a ravishing account of the Adagio of the early C major Concerto... Altogether this is a most rewarding compilation with performances and recording of the highest quality." Gramophone Magazine, July 2009

This boxed set includes all the surviving concertos of Haydn as well as some of the works which have been attributed to the composer.

Haydn is not primarily known for his concertos, yet beacons such as the Trumpet Concerto and the D major Cello Concerto remain justly and universally popular. Included alongside these works are five concertos for two lire organizzate (performed on two recorders/two flutes/flute and oboe), ten keyboard concertos (performed on harpsichord/organ/piano), the three violin concertos, and the 'little' D major Cello Concerto - among others.

This wonderfully varied set thus throws a spotlight on a less-celebrated area of Haydn's extraordinary output.