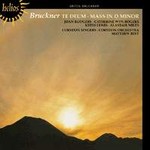 "Highest honours must go to the outstanding 140-voice chorus who sing with earth-shattering conviction, utmost clarity of diction and enviable precision of ensemble and intonation." BBC Music Magazine

"Highest honours must go to the outstanding 140-voice chorus who sing with earth-shattering conviction, utmost clarity of diction and enviable precision of ensemble and intonation … the combined strengths of this Hyperion version guarantee prime recommendation" BBC Music Magazine

"A glowing culmination to another outstanding Hyperion project" The Independent

The quality which most powerfully characterizes Bruckner's music is its religious mysticism. Not only the sacred choral works, but also the symphonies which form the bulk of his output, display a religiosity which is not grafted on but deeply ingrained. The son and grandson of humble village schoolmasters, brought up in the Roman Catholic tradition, his faith was sincere and unquestioning, and the inscription he placed at the head of the Mass in D minor ('Omnia ad majorem Dei gloriam'-'All to the greater glory of God') was a heartfelt expression of his dedication to the Almighty. He once remarked: 'When God finally calls me and asks "What have you done with the talent I gave you, my lad?", I will present to him the score of my Te Deum and I hope He will judge me mercifully.' Yet his self-doubt, especially in his earlier years, is legendary. He would spend endless time and energy in writing a full-scale symphony, and a few words of criticism, or a well-intentioned suggestion from a friend or pupil, would cause him to revise it, sometimes substantially. The Third Symphony, for example, went through three versions, the last two of which were published in his lifetime and reconstructed in scholarly editions in the 1950s. Even the sacred music, which some commentators claim he revised less, was by no means immune. The great F minor Mass of 1867-8 was revamped at least four times, and it was the 1881 version that was later prepared and edited by Haas (1944) and Nowak (1960).

Including the early Requiem, Bruckner completed seven Masses, culminating in the great settings of the 1860s-the D minor, E minor and F minor. The E minor Mass, with wind accompaniment, was written largely as a sop to the Cecilians, an austere group within the Roman Catholic Church who objected to complexity in liturgical music and deplored the involvement of an orchestra (would they really have accepted the wind instruments?). The D minor and F minor Masses are natural successors to the classical settings of Haydn and Mozart, conceived symphonically and with the orchestra allotted a prominent role. It was from Haydn and Mozart that Bruckner learned the cyclic principle in which the final Agnus Dei recalls material from earlier movements. From his beloved Schubert he acquired lyricism and lush harmony, while his innate sense of the monumental and his grounding in the counterpoint of J S Bach equipped him perfectly to write music on the grandest scale. Liszt and Wagner, also, were influences, the one chiefly in matters of thematic development, the other in melodic and harmonic innovations and in the size and use of the orchestra. There is no basic difference between the form and texture of Bruckner's symphonies and that of the more substantial of his choral works, and there are similarities of thematic contour and cross-quotations between the two. It was not until the age of forty, when he wrote the D minor Mass, that Bruckner showed the first real signs of artistic maturity. Asked why it had taken him so long to achieve such a bold, personal style, he replied, 'I didn't dare before'. It had taken an introduction to the music of Wagner to release his individuality.

The forces required for the D minor Mass are soprano, contralto, tenor and bass soloists, four-part chorus, organ and orchestra. The work begins with a gentle chromatic phrase, mostly on the strings, over a pedal point which anchors it firmly in the stated key. The chromatic inflexions continue into the first choral entry, lending an atmosphere of awe to the plea for God's mercy and leading to a rising scale, one of several ideas which recur to give unity to the work as a whole. This scale reappears, ascending or descending, in four of the subsequent movements-the Gloria, Sanctus, Benedictus and Agnus Dei. After a similarly chromatic 'Christe eleison', the second Kyrie features the striding octaves so often encountered in Bruckner's music.

In common with the short, wind-accompanied E minor Mass, but unlike the great Mass in F minor, the opening phrases of the Gloria and the Credo are set aside for the traditional plainsong intonation. Both movements are bold affirmations of faith, and both are symphonic and on a massive scale, but the chromaticism persists, and there are modulations to unexpectedly distant keys. The Gloria moves from D major to A flat for the phrase 'agnus Dei, Filius Patris', though it is a measure of Bruckner's tonal fluidity that he retains the original key signature. The chorus sings 'miserere nobis' to a melody which appears also in the third and ninth symphonies, while the lofty final fugue, to the single word 'Amen', is a climactic point, incorporating stretto, both plain and by inversion.

The Credo, the most purely symphonic of all the movements, is also in D major and displays the same range of expression, the same fusion of the dramatic and the contemplative, as the preceding Gloria. The first choral entry is a confident phrase containing powerful octaves reminiscent of the second Kyrie. The music here is more chord-based than contrapuntal, but at 'Et incarnatus est' the soloists introduce an imitative phrase in F sharp major. Soon a lengthy orchestral interlude over one of Bruckner's typical pedal points ushers in the 'Et resurrexit', and near the close of the section the words 'et vitam venturi saeculi' inspire a flowing new idea.

The brief Sanctus makes prominent use of the unifying scales and octaves. In accordance with custom, the 'Hosanna' is repeated note for note at the close of the Benedictus which starts in a chromatically inflected G major but finds its way, at one point, to the remote key of C sharp. The thematic linking of the outer movements is a conspicuous feature of Bruckner's symphonies, but it was an organizational idea carried forward from the Masses. The present Agnus Dei begins with a descending scale on the strings and a choral phrase clearly modelled on the first Kyrie. At the words 'dona nobis pacem' Bruckner recalls first the 'et vitam' from the Credo and later the Gloria's crowning fugue subject.

The composer himself conducted the premiere of the D minor Mass in Linz Cathedral on 20 November 1864, and its favourable reception ensured its repeat at the Redoutensaal, also in Linz, on the 18 December. After the November performance the critic of the Linzer Abendbote had pronounced it 'the best work of its type to be created for a long time'.

Parallels can be drawn between the mature Masses of the 1860s and the joyful C major Te Deum which was one of Bruckner's favourites among his compositions. He had begun work on a Te Deum in May 1881, almost contemporaneously with the sketches for his Seventh Symphony, but it was not until September 1883 that he gave it his full attention. Like the D minor Mass, the Te Deum calls for soprano, contralto, tenor and bass soloists, four-part choir, organ and orchestra, though the organ is optional. The choral writing is mostly homophonic-chords rather than counterpoint-which makes the eventual launching into the vast, final double fugue 'In te, Domine, speravi') the more telling. The string opening appears again in the F minor Mass and the Ninth Symphony, and the theme of the 'non confundar' is integral to the Seventh Symphony's Adagio.

There are thematic interconnections between the five movements of the Te Deum. The two outer sections ('Te Deum laudamus' and 'In te, Domine, speravi') are in a triumphant C major, the central 'Aeterna fac' equally joyous in D minor. In second and fourth place are sandwiched the 'Te ergo' and 'Salvum fac', both in F minor and both employing not only the vocal soloists but also a solo violin, much in the manner of the F minor Mass's 'Christe eleison' and even the Benedictus of Beethoven's Missa Solemnis.

Bruckner completed the Te Deum in March 1884 and it was first performed, accompanied by two pianos, on 2 May 1885. Hans Richter conducted the first performance with orchestra in Vienna on 10 January 1886. Even the normally vicious Hanslick, who never forgave Bruckner's espousal of Wagner, was uncharacteristically polite.

The versions used for the present recording are those of Nowak, that of the Mass dating from 1957, the Te Deum from 1962.