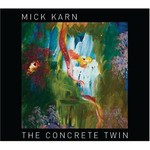 Laced with a dramatic symphonic feel, Mick Karn's 'The Concrete Twin' is comprised of 10 densely layered tracks that feature elements of Middle Eastern & Asian inflected world music; organs that wouldn't sound out of place in St. Paul's cathedral; jazzy, drum 'n' bass + hip-hop styled beats; as well as Mick's typically alien sounding, fretless bass work, which forms the nucleus that everything else in this recording orbits around.

The treated drums & percussion of Pete Lockett (Bjork / Amy Winehouse / Peter Gabriel) appear on several tracks, while all other instrumentation is handled by Mick himself; including the long neglected dida & ocarina, unheard since the recording of Japan's 'Tin Drum' (1981) and the artist's debut "solo" effort, 'Titles' (1982).

Welcome to My World