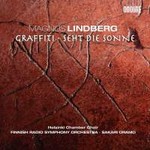 "There are Stravinskian as well as Straussian associations here but the overall result seems to me to have more in common with Carmina Burana than less noces, and some of the instrumental writing could be taken as parodying (or celebrating) Hollywood conventions of a Korngoldian Ancient Rome. Whether or not Lindberg is consciously mocking such lush aestheticisation of the primitive and the barbaric is impossible to tell. But the effect is always upbeat, exuberant and laid down with immense panache by the Finnish forces involved, in spectacularly vivid sound." Gramophone Magazine, March 2010

"..the truly individual moments are the most affecting - particularly the ethereal conclusion. In both works the orchestra under Sakari Oramo is a treasure trove of colour" BBC Music Five Stars

Bartok Violin Works-Concerto No. 2, Sonata for Solo Violin, Constrasts and Sonata No. 1