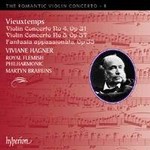 [A major Concerto] 'Munich-born virtuoso Viviane Hagner (rec. 8-10 July 2009) brings a splendid sense of the romantic style to this work, playing a 1717 Sasserno Stradivarius of sweetly brilliant tone. The performance becomes quite fiery and flamboyant, Hagner's trills and runs striking a wonderful balance between poetry--in the C Major second subject--and ensuing fireworks. The extended cadenza employs double stops and polyphony to advance the themes of the first movement, soon to modulate into the Adagio and Allegro con fuoco finale, a relatively effusive coda than any sort of independent movement, but tailor made for the high-minded virtuosity Hagner projects, much in the Heifetz mold' (Audiophile Audition, USA)

"The soloist, Viviane Hagner, fills out the broad, lyrical phrases vibrantly, with soaring tone in the higher positions. In the D minor concerto, she traces her lines in the opening Andante with appropriate fragility, and attacks the finale's Mendelssohnian figurations with relish. The fast passagework in the A minor taxes her - the tone can become very small - but at least she brings it the right energy and thrust. Martyn Brabbins draws crisp ensemble and warm, full tone from the Royal Flemish Philharmonic."
(MusicWeb July 2012)

Hyperion's Romantic Violin Concerto series reaches volume 8 and the music of the Belgian composer Henry Vieuxtemps, himself widely considered the finest violinist in Europe after the death of Paganini. Listening to the repertoire recorded here, he certainly deserves to be ranked among the most important composers for the violin in the mid-nineteenth century. Vieuxtemps never indulged in sheer virtuosity for its own sake; instead in his concertos and chamber works he brought a more classical dimension to the violin repertoire in place of the technically brilliant variations and fantasies on popular operatic themes that were so popular with audiences.

The Violin Concerto No 4 in D minor Op 31 which Vieuxtemps composed while he was court violinist in St Petersburg, is an heroic work on a substantial scale. It was described by Berlioz-who was perhaps comparing it with his own Harold in Italy for viola and orchestra-as a symphony with violin solo. In fact Vieuxtemps's writing for the orchestra is as assured and resourceful, and sometimes as imaginative, as his treatment of the violin, though there is no doubt that the solo instrument remains the leading actor in the drama, reaching heights of stratospheric virtuosity throughout. Violin Concerto No 5 in A minor Op 37 was written a few years later, in 1858-9, at the request of his friend Hubert Léonard, as the test-piece for a competition at the Brussels Conservatory. The work was, therefore, expressly designed to test the capabilities of (very advanced) student players, but it has maintained itself in the repertoire on its own merits and probably surpasses the Fourth Concerto in popularity. Fantasia appassionata Op 35 was probably written shortly after the Fifth Violin Concerto, in 1860. Unlike the concertos this is more frankly a vehicle for transcendental technical display, but expertly cast in a single movement of several effectively contrasted sections that achieves a balanced form as well as the exhibition of the player's prowess.