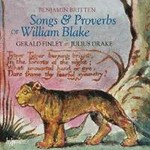 "Finley as ever acquits himself as a fine singer, a conscientious artist and a thoroughly reliable musician....In all (including the Blake) Julius Drake is the superb pianist."
(Gramophone Award WINNER 2011 - Solo Vocal)

"Finley and Drake have collaborated many times, and it certainly shows in their knowing communication through repertoire that makes quite varied demands on both performers. Hyperion's recording is absolutely first-rate, and so is this entire production--a well-conceived and ideally performed showcase for both composer and singer." (ClassicsToday 10/10 July 2010)

"[Finley] just seems to be singing naturally, but at the same time he colors and inflects with astonishing specificity. He manages to vary the repeats in those folk-song settings where verses are repeated...His diction is crisp and clear, which adds to the dramatic impact of his singing."
(Fanfare)

This disc contains Britten's two important song cycles for baritone: Tit for Tat, setting the poems of Walter de la Mare, and the more substantial and challenging Songs and Proverbs of William Blake. The latter was written for Dietrich Fischer-Dieskau; designed to showcase his unique blend of intense lyricism and dramatic characterization, qualities which are undoubtedly also exhibited by Gerald Finley.

Britten:
I wonder as I wander
Songs and Proverbs of William Blake, Op. 74
Tit for Tat
Um Mitternacht
A Poison Tree (Blake)
Evening, Morning, Night from Ronald Duncan's 'This Way to the Tomb'
Greensleeves
The Crocodile
The Deaf Woman's Courtship
Bird Scarer's Song