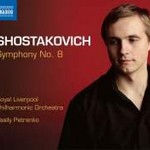 "Excellent playing from all departments of the orchestra plus vividly natural engineering complete what is easily the best installment of this ongoing cycle to date." (10/10 ClassicsToday)

"The Eighth always is a tough piece to project convincingly, but Petrenko is at his absolute best here, pacing the music perfectly and timing the climax in such a way that (for once) it doesn't sound like a less impressive recapitulation of the first movement--and this isn't because its previous occurrence is underplayed in any way. Excellent playing from all departments of the orchestra plus vividly natural engineering complete what is easily the best installment of this ongoing cycle to date." (10/10 ClassicsToday)

"This powerful, stirring performance would be a leading library contender at full price. At the Naxos price its claims on collectors' attentions are even greater. I eagerly await further instalments in this cycle, especially the Fourth and Tenth symphonies."
Bargain of the Month MusicWeb July 2010

A third of a century after his death the symphonies of Dmitry Shostakovich have moved to the absolute centre of the repertoire.

Written during World War II, the unusually constructed Eighth Symphony is a powerful work built on striking contrasts between music which is at times unremittingly bleak and at others brutally intense.

The predominantly slow opening movement, punctuated by a terrifying central crescendo, is followed by a scherzo of savage parody. At the heart of the Symphony a second fast movement builds remorselessly to a shattering climax over pounding timpani. The rapt, largely introspective fourth movement, Largo, leads straight into the last movement, Allegretto, which seems to reach out for hope in an uncertain world.

24 Preludes / Sonata No. 1 / Three Fantastic Dances and others