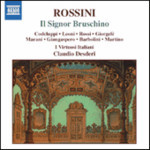 Born in Pesaro in 1792, the son of a horn-player and a singer, Rossini even in childhood had experience of the theatre, both as an orchestral player and as a singer himself.

His first professional success as a composer of opera came in 1810 with La cambiale di matrimonio (The Marriage Contract), the first of five such light-hearted works for the Teatro San Moisè in Venice. Il Signor Bruschino is the last of these one-act operas, in style prefiguring what was to come.

In the course of only a few years Rossini built up a reputation in Italy, with a series of operas, both comic and tragic. In 1822 he was in Vienna for a season of his operas there and the following year his Semiramide was staged at La Fenice in Venice. This marked the end of Rossini's career in Italy as an opera-composer. In recent years there had been attractive offers from abroad, a mark of his widespread popularity. Now married to the soprano Isabella Colbran, whose career was drawing to a close, he moved to Paris, the city for which his later operas were written, at first Il viaggio a Reims at the Théâtre Italien, followed by revisions of two earlier works for the Paris Opéra, and finally Le Comte Ory and, in 1829, the demanding four-act Guillaume Tell. There were negotiations for a new opera based on Goethe's Faust, but the fall of the restored Bourbon monarchy and the rise to power of a new government under the so-called citizen king Louis-Philippe, with more stringent financial policies, ended Rossini's contract for further operas and, for the moment, the life annuity that had been granted him. This was only restored six years later, after much aggravation. By now Rossini was, in any case, exhausted. He had written 39 operas in less than twenty years and won an astonishing degree of popular adulation. He now divided his time between Paris and Bologna, finding some relief from the company of his wife, who remained in Bologna, with Olympe Pélissier. In 1837 he eventually separated from Colbran, but it was only after his wife's death in 1845 that Rossini was able to marry his mistress.