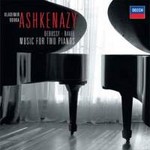 "Father and son join forces here with winning élan. Vladimir Ashkenazy is one of the great pianists of modern times, with a legacy of landmark solo and concerto recordings to challenge anybody's. His son Vovka has inherited the genes and, on disc, has collaborated in performances of chamber music by Tchaikovsky, Arensky, Poulenc and Ravel." Daily Telegraph, 11th August 2009 ****

"Early 20th-century repertoire has often brought out the best in Vladimir as pianist and conductor, and he certainly plays with love here. Harnessed to their Steinways, father and son display exceptionally close rapport, thinking and breathing as one in music that requires almost inhuman co-ordination to do its magic full justice. No note is out of place, no texture muddy. They're at their very best in Ravel's La Valse transcription and the Feria finale of Rapsodie espagnole, where they spray the listener with kaleidoscopic textures and modulate dynamics with the punch of master dramatists." The Times, 7th August 2009 ****