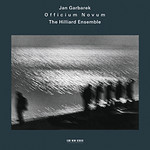 "Over the immanent, limpid voices Garbarek improvises equally immaculate counter-melodies. His contributions tend to be somewhat predictable, more decoration than improvisation in the fullest sense, but his tone is so pleasing...and the melodies so calming to the spirit that he can be forgiven." BBC Music Magazine, November 2010 ****

"The most successful piece is the 13-minute "Litany", where both elements contribute without crowding. Elsewhere, the two blend best when Garbarek's sax most closely resembles the dry warmth of the duduk flute, as on "Ov zarmanali"." The Independent, 17th September 2010 **

"On Officium Novum, these ageless musicians look to the Orthodox music of Armenia, Russia and Byzantium, although there's more besides, including Nativitas, by the 12th-century Gallic composer Pérotin, and Arvo Pärt's touching prayer Most Holy Mother of God. Immensely moving." Sunday Times, 19th September 2010 ****

"Over the immanent, limpid voices Garbarek improvises equally immaculate counter-melodies. His contributions tend to be somewhat predictable, more decoration than improvisation in the fullest sense, but his tone is so pleasing...and the melodies so calming to the spirit that he can be forgiven." BBC Music Magazine, November 2010 ****

"Garbarek's not one for idle doodling. Neither does he get stuck in a rut. Each piece summons a different response...So please welcome Officium Novum. Neither classical nor jazz, neither new nor old, this music simply exists, for everyone's wonder and nourishment." The Times, 1st October 2010 ****

"the Hilliard's vocals seemingly emerg[e] from the misty darkness to engulf you in waves of pure human sound. Garbarek's sax weaves within, soars over and ducks below them, like some benign but authoritative, other-worldly presence. His own We Are The Stars is nothing less than spellbinding." Classic FM Magazine, November 2010 ***

"The frisson created by the Hilliards' chaste vocalising and the raw wailing of Garbarek's saxophone manifests as sacred versus profane, like a chilled jazzer idling against a church wall...It's a pretty seductive formula that still creates a fair measure of magic." Gramophone Magazine, November 2010

The inspired bringing together of Jan Garbarek and the Hilliard Ensemble has resulted in consistently inventive music making since 1993. The unprecedented "Officium" album, with Garbarek's saxophone as a free-ranging 'fifth voice' with the Ensemble, gave the first indications of the musical scope and emotional power of this combination. "Mnemosyne" (1998) took the story further, expanding the repertoire beyond 'early music' to embrace works both ancient and modern.

Now, after another decade of shared experiences, comes "Officium Novum", the third album from Garbarek/Hilliard, recorded, like its distinguished predecessors, in the St Gerold monastery. A central focus this time is music of Armenia based on the adaptations of Komitas Vardapet, pieces which draw upon both medieval sacred music and the bardic tradition of the Caucasus. The Hilliards have studied these pieces in the course of their visits to Armenia, and the modes of the music encourage some of Garbarek's most impassioned playing. Alongside the Armenian pieces in the "Officium Novum" repertoire: Arvo Pärt's "Most Holy Mother of God" in an a cappella reading , Byzantine chant, two pieces by Jan Garbarek, including a new version of "We are the stars", as well as the Spanish "Tres morillas". There is also a new account of Perotin's "Alleluia, Nativitas": the freedom of interpretation is testimony to the way the project as a whole has grown since its introduction on ECM New Series, with the Hilliard Ensemble now very much involved in the music's improvisational processes and implications.