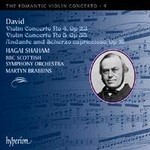 Ferdinand David is principally known today as the dedicatee of Mendelssohn's violin concerto; he gave the premiere of the work in 1845. But in his time he was also celebrated as a composer, and Hyperion is delighted to present this disc of world premiere recordings

as Volume 9 in the Romantic Violin Concerto series.

David was a prolific composer and his output included two symphonies, five violin concertos, a string sextet, quartets, several sets of variations and volumes of studies for violin, choral works and some Lieder. His works had considerable success in his lifetime, and their revival reveals highly attractive music of phenomenal accomplishment. Bearing in mind David's close affinity with Mendelssohn it is hardly surprising that some of his music has a fairly Mendelssohnian character. This extends to the skilful handling of Classical forms with a rather more Romantic palette, but there is also an amiable individual character at work which produces music rich in wit and sentiment.

Hagai Shaham, a regular of this series and a master of the 19th century virtuoso idiom, performs these works with his usual panache, ably accompanied by the BBC Scottish Symphony Orchestra and Martyn Brabbins.