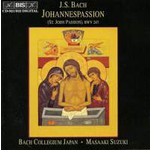 "What more can I say, other than that I found myself drawn into the drama from the start, at the same time finding much that struck me as fresh in matters of interpretation, and tonality of great beauty. …this is a major recording event, and an eminently satisfying one." Gramophone Magazine

"Bach seems to have performed his St John Passion on four Good Fridays during his tenure as Thomaskantor at Leipzig. However, he continued to make significant revisions right up to the last performance under his direction, on April 4, 1749. Of the four versions, the second, dating from 1725, contains the most distinctive revisions, the first version (1724) and the last bearing close affinity with one another. Masaaki Suzuki and his talented Bach Collegium Japan have chosen Bach's latest version.
All has evidently been carefully prepared and deeply considered: what's refreshing about their approach is the importance afforded to the relationship between text and music, to the theological source of Bach's inspiration, and the emotional impact of the story and music on its audience. Some of their thoughts may strike readers as simplistic, even perhaps a shade sentimental, but on the strength of this fervent performance we can hardly question their sincerity.
The role of the Evangelist is sung with clarity and lightness of inflexion by Gerd Türk. His performance is eloquently measured, his phrasing well shaped and his articulation engagingly varied.
All this makes him a riveting story-teller. The role of Jesus is taken by Chiyuki Urano, warm-toned and resonant. Ingrid Schmidthüsen and Yoshikazu Mera make strongly appealing contributions and Peter Kooij is satisfying and affecting.
Excellent, too, are the contributions of the Collegium's choir of women's and men's voices.
Choral and instrumental articulation is incisive, propelling the rhythms with energy. The performance draws you in from the start. This is a major recording event, and an eminently satisfying one." Gramophone Classical Music Guide, 2010