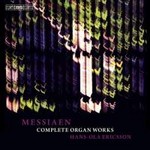 Incorporating the fruits of the composer's untiring research into the various aspects of tonality, bird-song, ancient Indian and Greek rhythms, and his life-long preoccupation with the philosophy and liturgy of the Catholic Church, the organ music by Olivier Messiaen forms a pillar in the music of the 20th century. Over some 50 years, Messiaen created a body of works for the great Cavaillé-Coll organ in the Church of La Trinité in Paris, where he was active throughout most of his life. All of these have been gathered in this boxed-set of Hans-Ola Ericsson's highly acclaimed recordings, many originally released as single discs between 1989 and 1992.

"of outstanding quality, both musical and technical" Penguin Guide