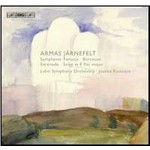 Completed in the spring of 1893, Järnefelt's Serenade was composed in Paris, and the French influence - especially that of his teacher Massenet - can be clearly heard.

Two years later, in the Symphonic Fantasy, composed after a momentous visit to Bayreuth, the influences are rather Wagnerian, and especially obvious in the central slow section with its clear reminiscences of Parsifal. The programme closes with Berceuse for violin and orchestra. The piece is a beautifully atmospheric miniature which has found a place in concerts of lighter music all over the world.

Conducting his compatriot's music - as well as performing the violin solos - is Jaakko Kuusisto, well-known to a wider audience for his recordings as a violinist of music by Sibelius, Rautavaara and Kalevi Aho. He conducts the Lahti Symphony Orchestra, whose performances of the music of Sibelius have earned them world-wide recognition.