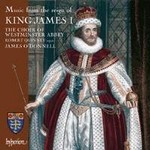 "The laments by Tomkins and Ramsey,and Gibbons's "O Lord, in thy wrath", all sung unaccompanied, are moving in their intensity...this recording should be snapped up by all lovers of the period." Gramophone Magazine, April 2011

"Where words and music most happily merge - for instance in Gibbons's Hosanna to the Son of David - the director and his vocalists exude confidence, animating melodic lines gracefully to reach a satisfying climax. In the largely contrapuntal O clap your hands, O'Donnell's deft handling of voices brings a lovely delicacy to the texture." BBC Music Magazine, March 2011 ***

"The hero of the disc is...the Abbey's sub-organist Robert Quinney...Stylish, tastefully registered and crisply delivered [the four Gibbons organ pieces] are in their way true gems...many choirs would envy the tight ensemble, impeccable intonation and crystal-clear diction, not to mention the unfailingly excellent solo voices drawn from the ranks of the choir" International Record Review, March 2011

"The laments by Tomkins and Ramsey,and Gibbons's "O Lord, in thy wrath", all sung unaccompanied, are moving in their intensity...this recording should be snapped up by all lovers of the period." Gramophone Magazine, April 2011

Westminster Abbey has been the focus of British royal occasions for centuries, and the early seventeenth century saw the most dazzling musicians of the age writing music for the Court in all its various incarnations. This fascinating disc presents a selection of works from the reign of King James I.

The most celebrated name on this disc is that of Orlando Gibbons, and some of his most masterly works are presented here including the gloriously contrapuntal O clap your hands and the startlingly original verse anthem See, see, the Word is incarnate, setting an extraordinary text which covers the whole of the liturgical year.

The most eloquent and emotionally intense music recorded here was most likely never intended for performance in the Abbey, or any other church, but has a particularly Royal relevance. The laments of King David were set by many composers of this period. These moving texts have no place in the liturgy, being neither part of the Ordinary of Psalms and canticles, nor able to furnish a seasonally appropriate or devotional anthem. Their composition seems therefore to have been a response to the death in November 1612 of the Prince of Wales, Prince Henry. These are courtly laments, in which the composers give voice - and perhaps vied to give voice most eloquently - to the grief of the King (in the settings of David's lament for his son Absalom) and Prince Charles (in the 'Jonathan' pieces, in which the king describes his friend as 'my brother'). Included is the best known of all the 'Absalom' pieces, Tomkins's When David heard, together with his equally moving 'Jonathan' setting, Then David mourned.

Gibbons, O:
Great King of Gods
O all true faithful hearts
Fancy in C fa ut
Fancy in Gamutt flatt
See, see, the Word is incarnate
Fantazia of foure parts
Hosanna to the son of David
O Lord, in thy wrath rebuke me not
Almighty and everlasting God
Preludium
O clap your hands

Ramsey:
How are the mighty fallen

Tomkins:
Be strong and of a good courage
O sing unto the Lord a new song
When David Heard
Then David mourned

The Feast of Saint Peter the Apostle at Westminster Abbey

Mary & Elizabeth at Westminster Abbey: 'Sisters in hope of the Resurrection'
more suggestions…