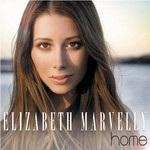 An album that reflects Kiwi songstress Elizabeth's natural love of her country, an admiration of our native songwriters and a desire to celebrate the source of her inspiration.

Elizabeth Marvelly is back. Now 21, the Kiwi songstress returns with an album conceived through the whirlwind experiences of three years of international touring. Described by Prime Minister John Key as a "national treasure", Elizabeth learnt to trust her instinct and grew up in the professional realm rather quickly - when you have talent there is no time to waste.

Taken to the national stage in 2006 at the age of 16 by Sir Howard Morrison, recording her critically acclaimed debut album in 2007 with Carl Doy, touring Australasia in 2008 and then Europe in 2009 with Britain's Got Talent opera phenomenon Paul Potts, performing to crowds numbering in the millions at prestigious venues including Royal Albert Hall and the Sydney Opera House; Elizabeth Marvelly's musical life has been a wonderful ride.

Somewhere along the way the talented songstress found the time and focus to take the next step. Introducing 'Home' recorded with the Grammy-nominated and Brit-award-winning UK producer Nick Patrick, 'Home' is an album that reflects Elizabeth's natural love of her country, an admiration of our native songwriters and a desire to celebrate the source of her inspiration after a few whirlwind years on the international stage.

'Home' is an album of predominantly re-interpreted songs (although Elizabeth penned the opening and title song) with the orchestral accompaniment performed by the NZSO. It is a foray into timeless Kiwi pop classics, with the elegant versions of "Don't Dream It's Over" by Crowded House and "Welcome Home" by Dave Dobbyn. It also hosts grand, stirring renditions of traditional Maori songs, "E Papa", "Tarakihi" and the beautiful duality of "How Great Thou Art (Whakaaria Mai)" and "Amazing Grace (Te Atua)". The sense of universal appeal is complete with Gershwin's "Summertime", Caccini's "Ave Maria", plus "I Vow To Thee My Country", "The Prayer" (featuring Paul Potts) and "Over the Rainbow / I'm Always Chasing Rainbows". The latter, a personal favourite, one Elizabeth will always associate with her inspiration, mentor and relative; Sir Howard Morrison.

Home they say is where the heart is. Elizabeth wears it plainly and honestly on her sleeve. This record is coming of age - a coming home - for this down-to-earth Kiwi girl. With this spirit and a delicate sense of song choice, 'Home' is a record that reflects the joy of a young and exceptionally brilliant artist who is embracing the future with open arms.