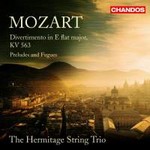 "If you do not have a recording of the Divertimento already here is an ideal opportunity to do so, and I am sure that in so doing many hours of supreme musical pleasure are guaranteed."
(MusicWeb Feb 2011)

This new release highlights some of Mozart's lesser-known works, all for string trio: the Divertimento in E flat major, KV 563 and two of the Fugues with slow Preludes from the set of six, KV 404a (after Bach).

The Divertimento, KV 563 is not only Mozart's sole large-scale composition for string trio, it is also one of the first works ever written for the combination of violin, viola, and cello. It was composed in 1788, the same year as three of Mozart's greatest and best-known works, the symphonies in E flat, G minor, and C (the 'Jupiter'). Mozart was at the absolute height of his powers as a composer, and at the premiere of the divertimento in Dresden in 1789, he himself played the viola part.

The title 'Divertimento' implies music that is not excessively demanding or intense, but which exhibits a light-hearted appeal that was deemed perfect for the social and musical gatherings of the late eighteenth century. In this work by Mozart, however, each of the three instruments is called upon in turn to take on the role of virtuoso soloist, which ultimately takes KV 563 away from the being a mere 'divertimento', in terms of music entertainment, into something more profound.

The authorship of the Six Fugues with Slow Preludes, KV 404a is uncertain, but they are commonly considered to be works by Mozart. Nos 4 and 5, featured on this release, are transcriptions of works by Bach. In No. 4, the prelude comes from Bach's organ trio Sonata No. 3, and the fugue is Contrapunctus VIII from Die Kunst der Fuge. The fifth prelude and fugue are formed from the second and third movements of Bach's second organ sonata.

The works are performed by The Hermitage String Trio, one of the finest emsembles of its type. Steeped in the Russian tradition of string playing, the Trio has performed with such great musicians as Yehudi Menuhin, Martha Argerich, Anne-Sophie Mutter, and Gidon Kremer, and has given concerts at the Petworth, Newbury Spring, and Dart festivals, at the Sage, Gateshead, and the Wigmore Hall, London. It has also given concerts in France, Germany, and Australia, among others. In 2008, the distinguished violinist Boris Garlitsky joined the founder members Alexander Zemtsov, principal viola of the London Philharmonic Orchestra, and Leonid Gorokhov, who enjoys a flourishing career as a solo cellist. 'True brilliance!' noted The Strad of a recent performance by The Hermitage String Trio, adding: 'This ensemble will do much to put more string trio repertoire on the musical map.'

Piano Concerto in A flat / Concertino in G major / Gesellschafts-Rondo