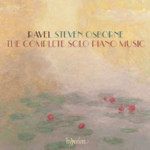 "[Gaspard] is technically immaculate...and gently seductive before turning on a more sinister pressure...Osborne spins his dancers towards a visceral and devastating oblivion."
(Gramophone Award Finalist 2011 - Instrumental)

"Steven Osborne, ever a poised, technically impeccable virtuoso, combines clarity with heart. All a shimmering pleasure." The Observer, 13th February 2011

"[Gaspard] is technically immaculate...and gently seductive before turning on a more sinister pressure..."Alborada" from Miroirs is another striking success, where a trickster's ribaldry and high jinxs explode into violence, and in La Valse (suitably arranged and "orchestrated"), Osborne spins his dancers towards a visceral and devastating oblivion."
(Gramophone Award Finalist 2011 - Instrumental)

"His tempos, kaleidoscopic tonal colouring, textual clarity, and amazing dynamic range and variety of touch manifest an innate empathy with the composer...These are inspired performances with Award Winner written all over them. The perfectly-voiced piano, the venue/acoustic, producer and engineer, and an artist who was born to play Ravel combine to make the best complete Ravel cycle on disc." Classic FM Magazine, April 2011 *****

New releases of Steven Osborne's best-selling discs have become some of the most eagerly-awaited events in the pianophile diary. This most delicate and subtle of musicians also displays a pyrotechnical deployment of digital acrobatics, mesmerising colour control and breathtaking articulation. All these qualities are visible in this two-disc set of some of the most important piano music of the early twentieth century. Ravel's works have been central, too, to Steven Osborne's performing repertoire throughout his career, making this set a perfect marriage of composer and performer.