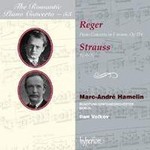 "While an easy majority of pianists would run for cover when faced with such sheerly physical demands, Hamelin relishes every challenge, clarifying and refining Reger's potential for opacity at every point."
(Gramophone Award Finalist 2011 - Concerto)

"even Serkin would surely have marvelled at Hamelin's stunning authority. While an easy majority of pianists would run for cover when faced with such sheerly physical demands, Hamelin relishes every challenge, clarifying and refining Reger's potential for opacity at every point. His first entry, like a thunderclap, makes you leap to attention but so too does his expressive beauty in the subsequent molto tranquillo."
(Gramophone Award Finalist 2011 - Concerto)

"One of Hamelin's greatest virtues...is his uncanny and apparently effortless ability, in music of this sort, to bring focus to the main lines - and to do so not by playing down the secondary elements but by making sure that they all contribute, harmonically and especially rhythmically...for all the searing virtuosity, this performance [of the Strauss] is even more notable for its with than for its fireworks...Interplay with the orchestra is exceptionally adroit."
(International Record Review)

"this is one of the most lucid, as well as passionate, readings of the [Reger] I have heard. Hamelin never makes the deep left-hand bass writing in the first movement sound heavy, and he plays the very full chords as crisply as they demand...Hamelin gives one of the most stylish and elegant accounts of [the Strauss] I've heard"
(BBC Music Magazine)

"Pianist and conductor are as one with the orchestra taking more of an accompanying role and with the orchestral textures much lighter and crisper. Hamelin's passage-work was perfectly breathtaking throughout, with Hamelin clearly relishing the playful and whimsical nature of the material. He also brought out the lyrical beauty of the waltz episode and allowed the music to breathe in a very sensuous way. The final cadenza was nothing less than a tour de force. Altogether, this is an absolutely outstanding recording."
(Recording of the Month MusicWeb May 2011)

"Both performances are formidable. Marc-André Hamelin does powerhouse things with the Reger, and is notably harrowing in the great central largo. The skittish charm with which he plays the Burleske, meanwhile, belies its often atrocious difficulty. Ilan Volkov and the Berlin Radio Symphony Orchestra are first rate."
(The Guardian)

Strauss, R:
Burleske for Piano and orchestra in D minor