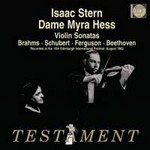 "Warmly expansive accounts of the Brahms A major and the Beethoven Op. 96 brings special distinction to this memorable recital recorded near the end of Hess's distinguished career."
(BBC Music)

"These are magnificent performances. Stern's warm, vibrant tone and his ability to spin a beautiful legato line are complemented by Hess's focus on a cantabile touch; together they emphasise the lyrical qualities of the Brahms and Beethoven sonatas but never at the expense of spirit and vitality...[The Ferguson] is well worth hearing, and difficult to imagine a better performance."
(Gramophone)

Both in his memoirs and in conversation with the present writer, Stern named Myra Hess among the musicians who had influenced him. The two met in the summer of 1951 at the Casals Festival in Perpignan but it was not love at first sight, on Hess's side at any rate. When their record company American Columbia, which largely underwrote the Casals Festival, suggested that Hess should record some chamber music at the 1952 event in Prades, she was grateful for the chance to renew collaboration with her old friend Szigeti but was not too keen to work with Stern. Once she started rehearsing Brahms's B major trio with him and Casals, however, she realised how much she had in common with Stern. The trio was recorded and Hess also played and recorded the Schumann Quintet with Stern, Alexander Schneider, Milton Thomas and Paul Tortelier, as well as three works involving Szigeti: Schubert's A major Sonata, Brahms's C major Trio (with Casals) and C minor Piano Quartet (with Milton Katims and Tortelier).

These Prades encounters eventually led to the Hess-Stern duo which mainly appeared in New York, Edinburgh (at the Festival) and London. They initially played Brahms's G major Sonata at the Metropolitan Museum of Art, New York, on 16 April 1956 in honour of the ninetieth birthday of David Mannes, founder of the Mannes College of Music: Stern began the recital with the Bach Chaconne and Hess ended it with Beethoven's A flat Piano Sonata, Op.110. Thereafter they gave sporadic sonata recitals, the repertoire taking in all three by Brahms, as well as two by Bach, a few Beethovens and individual works by Mozart and Schubert. Although the duo was not recorded commercially, we do have this BBC transcription of what turned out to be their last recital, on 28 August 1960 at the fourteenth Edinburgh International Festival (a London appearance scheduled for that October had to be cancelled, owing to the heart attack which hastened the end of Hess's career). To hear two such great romantic artists together is something of a privilege.
- Tully Potter, 2011

Barber: Adagio for Strings, Violin Concerto (with Schuman - In Praise of Shahn & Ives - The Unanswered Question)