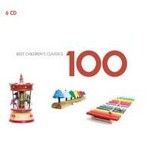 This 6CD set contains 100 tracks from the most familiar and best-loved works for children, performed by many of the world's leading instrumentalists, orchestras and conductors.

• CARNIVAL consists of a group of popular works that will stimulate the imagination of every child. It starts with the famous 'Flight of the Bumble-Bee' followed by one of the great children's classics: Le Carnaval des animaux (The Carnival of the Animals) by Camille Saint-Saëns, a grand zoological fantasy which humorously illustrates in music a fine assortment of different animals, including lions, kangaroos, asses, an elephant, a swan and even pianists. Also on the disc is Prokofiev's children's tale Peter and the Wolf, narrated in English by Sir John Gielgud, and Britten's clever Variations and Fugue on a Theme of Purcell, subtitled The Young Person's Guide to the Orchestra, brilliantly conducted by Sir Simon Rattle.

• TOYS brings together a collection of charming suites about children and their toys by the French composers Fauré, Debussy and Bizet, as well as including Leopold Mozart's delightful 'Toy Symphony, Pierné's Marche des petits soldats de plomb (March of the Little Lead Soldiers) and some of the most popular character dances from the ballet The Nutcracker by Tchaikovsky. The latter with Andre Previn and the Royal Philharmonic Orchestra.

• NATURE is intended to draw children into the atmosphere of the countryside and experience the sights and sounds of nature. It starts with 'Morning' from Grieg's Peer Gynt, that vividly evokes the start of a new day. Also here is Smetana's tone poem The Moldau that depicts the progress of a great river in Bohemia, and the first movement of Beethoven's famous 'Pastoral' Symphony in which the composer recalls the awakening of pleasant feeling on arriving in the countryside. Chopin's 'Raindrop' Prelude evokes the bleakness of a dull, rainy day, Vivaldi's 'Winter' from The Four Seasons paints a vivid picture of snow and ice, and nothing could be jollier than Percy Grainger' s two summery pieces: 'Country Gardens' and 'Shepherds' Hey'. The CD ends with Wagner's Forest Murmurs from the opera Siegfried performed by the Berlin Philharmonic Orchestra.

• FANTASY invites the listener to let his or her imagination run free while listening to some of the world's best-loved descriptive music. The titles themselves are self-explanatory, such as A Midsummer Night's Dream, A Night on the Bare Mountain, Pictures at an Exhibition and 'Uranus the Magician' from The Planets. The disc concludes with one of the most popular children's pieces of all times - L'Apprenti sorcier (The Sorcerer's Apprentice) by Dukas - that was memorably brought to life by Walt Disney in his 1940 animated film Fantasia with Mickey Mouse as the meddlesome apprentice. This is performed here by the London Symphony Orchestra conducted by Andre Previn.

• LULLABIES is a disc that will particularly suit young children. It contains a collection of some of the most relaxing classics ever written that will be specially appreciated by children at bedtime as they are preparing to go to sleep. The aptly named 'Lullaby' by Brahms is here, alongside the tranquil slow movement from Mozart's Clarinet Concerto, Chopin's soothing Nocturne in E flat, Bach's timeless Air 'on the G string' and many other much-loved relaxing works. Performers here include the Academy of St Martin in the Fields and the Bath Festival Orchestra.

• DANCE. No child can resist dancing, and this programme covers every kind of dance: from the charming 'Dance of the Little Swans' in Tchaikovsky's Swan Lake to the rumbustious 'Sabre Dance' in Khachaturian's Gayaneh - from the grand formality of the 'Dance of the Knights' in Prokofiev's Romeo and Juliet to Widow Simone's merry 'Clog Dance' in Hérold's La Fille mal gardée. Other works included are 'The Dance of the Hours' from the opera La Gioconda, also immortalised in Walt Disney's 1940 film Fantasia for a hilarious spoof ballet performed by ostriches, hippos, elephants and alligators, Saint-Saëns' spooky 'Danse macabre' in which the xylophone represents skeletons making merry in a cemetery at midnight on Halloween as death leads the dance on an out-of-tune violin, and Ravel's famous 'Bolero', to which Torvill and Dean skated to Olympic glory in 1984. 'Bolero' is performed here complete by the Orchestre de Paris.