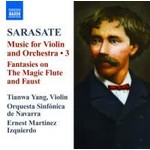 "It's really a crime that you'll almost never encounter this music at so-called "serious" symphonic concerts. If you put together the last three numbers on this recording--the "Faust" Fantasy, Barcarolle, and Caprice-Jota--you have a perfect, concerto-length triptych in fast, slow, fast form. It would be a spectacular, audience-pleasing showcase for the soloist, and I have no doubt that Ms. Yang would enjoy taking it on tour. As in previous releases in this series, Tianwa Yang plays marvelously, fearlessly, and with great freshness and verve. Her technique is impeccable--note the immaculately-tuned harmonics in the Caprice-Jota, or her nicely grainy, "primal" drone-bass timbre at the start of Muiñeiras. She's a joy to listen to, and Ernest Izquierdo's accompaniments have all the poetry and shameless gusto that's necessary to convince us that we're listening to music of real quality, never mind the flash. Naxos' sonics offer ideal balances, and flatter both soloist and orchestra." (10/10 ClassicsToday April 2011)

"This album is a sort of time capsule: Pablo Sarasate's music gloriously restored to its place onstage, performed by his own orchestra and partly on his own violin, by a violinist raised on a long-gone style of playing. Only there is a chance that what we are hearing is not a portal back to a golden age, but the beginning of a new one."
(Bargain of the Month MusicWeb June 2011)

The Magic Flute Fantasy is a masterpiece of the genre à la Paganini, while the Gounod Fantasy (his second) is a miracle of lightness. The highly popular Navarra, the charming Muiñiera with its bagpipe effects, the bewitching Venetian Barcarolle and the Introduction et Caprice-Jota with its barcarolle-like beginning and dancing finale coming thrillingly to life on this album.

Puccini: His Life and Music [Book plus 2 CDs]