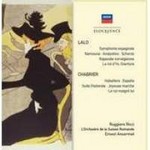 It used to be fashionable to include the music of Lalo in concert in the mid-20th century. At the start of the 21st century, however, his works has fallen completely into neglect, in France as much as elsewhere. This is a cruel injustice for music full of sensuality and very highly inspired, quality orchestration. This unique 2CD collection brings together all of Ansermet's Lalo recordings for Decca, including a fiery account of the Symphonie espagnole with Ruggiero Ricci, as well as the much-praised stereo Chabrier recordings which first appeared on a delightful Decca CD in its 'Classic Sound' series. The Lalo recordings were made at various times during the composer's long tenure with the Orchestre de la Suisse Romande, starting in March 1959 with the Symphonie espagnole and ending with the little Scherzo in September 1968, during his last Decca session with his Swiss orchestra.

And 'classic sound' is as much an epithet for the Chabrier recordings as they are for the Lalo. While so many current Chabrier recordings are notable for their elan and elegance, Ansermet emphasises the works' earthy, comic side with a just a hint of oafishness - all reflecting the conductor's brotherly affection for his dear Chabrier, after whom he named his country house 'Le Chabriere'. The collection also includes the rare 'Habanera'. Ansermet's 1955 recording of this piece was made in both mono and stereo, and the stereo version is published for the very first time as part of this anthology.