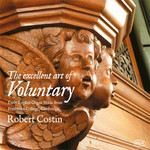 "I consider this to be an excellent offering which gives us some neglected repertoire played and recorded to high standards...Thoroughly recommended" (ORGANZ News September 2011)

It was as a chorister at Peterborough Cathedral, under the direction of Christopher Gower, that Robert Costin's passion for choral, organ and keyboard music in general was first awakened. Attendance at King's, the Cathedral School, was followed by the award of a major music scholarship to Oundle School where Robert gained his ARCO diploma at the age of seventeen. In his final year at Oundle Robert held the Organ Scholarship at St. Matthew's Church, Northampton. Robert maintained his links with Oundle for many years as a tutor to aspiring young organists at the Oundle International Organ Festival. On leaving school Robert spent a year at the Royal Academy of Music studying organ with Nicholas Danby and harpsichord with John Toll, as well as participating in masterclasses given by such prominent musicians as Gillian Weir and Gaston Litaize.

Robert gained his FRCO diploma at the age of nineteen and went up to Pembroke College, Cambridge in 1990, having been awarded an organ scholarship. As well as reading for a degree in music, Robert studied organ with David Sanger and directed the Pembroke Chapel Choir for numerous services and concerts, including a tour of Romania in 1992.

In 1996 Robert moved from cathedral music into the field of education, taking up the post of Assistant Director of Music and Organist at Worksop College, followed in 2001 by a similar position at Bedford School. At Bedford Robert was in charge of directing the Chapel Choir, the making of a CD and the organising of several national and international tours, which included venues in Paris, Rome and Ireland. Robert has been Director of Music at Ardingly College since September 2007.

Robert's recital venues in recent years have included King's College, Cambridge, Westminster Abbey, St. Paul's Cathedral, Nairobi Cathedral, and Saint Thomas Church, New York. He has played extensively in Australasia, North America and Europe. Robert has appeared regularly as a broadcaster and performer on Radio New Zealand's Concert FM, most recently a 'Composer of the Week' talk on the life and music of Herbert Howells, and his recordings have featured on the popular US radio programme Pipedreams. Robert is also a regular reviewer for MusicWeb International.

The critical acclaim following his first solo CD, Organ Triumphant, has been matched by that of his second CD which is devoted to the music of Herbert Howells, and recorded on the organ of Dunedin Town Hall in New Zealand. A new CD of music by Liszt and Reubke made on the organ of Wellington Town Hall was released on the Atoll label in 2008.

The Sacred Flame: European Sacred Music of the Renaissance and Baroque Eras