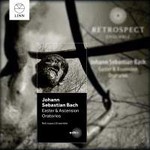 This, the second release of the highly anticipated Retrospect Ensemble series, features the Easter Oratorio, one of Bach's best-known oratorios and a monumental work, as well as the Ascension Oratorio.

Originally released in 2011 'J.S. Bach: Easter and Ascension Oratorios' has been re-issued as part of Linn's ECHO series which offers a second chance to enjoy the best of the label's award-winning catalogue.

This dynamic recording highlights the skill and brilliance of Bach's writing through the inspired story telling of its star soloists and the passion of the Ensemble.

Named a Finalist in the 'Baroque Vocal' category at the 2011 Gramophone Awards, the recording received many five star reviews in addition to being named The Sunday Times' 'Classical Record of the Week'.

Founded by Matthew Halls, Retrospect Ensemble takes its musicians and audiences on an exciting journey, exploring the repertoire of four centuries and embracing the practices, styles and aesthetics of former ages with renewed vigour and a fresh approach.

Retrospect has appeared at major UK festivals including the Edinburgh International Festival and Norfolk and Norwich Festival and performed at Wigmore Hall and Cadogan Hall, London.

Matthew Halls has established himself as one of today's leading young conductors. A former Artistic Director of The King's Consort, he has conducted in prominent venues throughout the UK and Europe

"This is a disc to savour and enjoy, not just for the sublime music but for performances which possess an immaculate feeling for style and a wonderfully fresh and vital delivery of both words and music." International Record Review