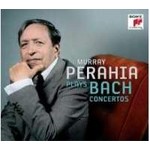 "Most of the works on these discs started life in another form. Perahia is an eloquent advocate, not least in Bach's wonderful slow movements, above all in a superb account of the Italian Concerto." Sunday Times

Celebrated by his fans and media alike on first release, several of the concertos have been unavailable for some time and make a welcome return to the catalogue,

This set contains some of Perahia's all-time best-selling recordings. The initial releases of these recordings of the Concertos Nos. 1-7 have sold in excess of 30,000 units in the UK alone, Murray Perahia's recording of Bach's Solo Keyboard Partitas 1,5 & 6 won the 2010 BBC Music Magazine Award for Best Instrumental Recording.