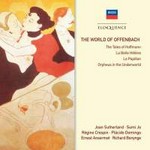 "[the voice] sparkles all through. Crespin … sounds far more at home twinkling in operetta than ever the majority of her admirers would have suspected. […] She has been splendidly served by her accompanists, not to mention the recording engineers who, while conveying the individual timbre of the voice very faithfully, have not allowed it to "glare"; as it sometimes has done on record."
(Gramophone)

In October 1880, at the age of sixty-one, having poured out his high-spirited talent into over a hundred works for the stage, Offenbach lay exhausted on his deathbed. A strange figure wearing dark glasses and a floppy white cravat knocked at the door. It was Léonce, the comedian who had made such a big hit in Orphée aux enfers. The concierge told him: 'Monsieur Offenbach is dead. He died very gently, without realising it'. 'Well, well', replied Léonce. 'How annoyed he'll be when he finds out.'

And that curious little anecdote, told by James Harding in his excellent liner notes, tells something of the wit and sparkling humour of these performances. Traversing a wide span of recordings - from Ernest Ansermet cheeky in the brilliantly-recorded overtures, to Sutherland and Crespin in voices thrilling and beguiling for the arias, this compendium offers not only the Offenbach 'hits' (including the Barcarolle from The Tales of Hoffman, both as an orchestral interlude as well as a duet), but several delightful rarities, performed by top-shelf Decca artists. Long out of print, the CD is now restored to circulation.