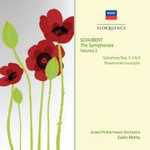 "This is a sunny performance, well-paced and well-sprung, with Mehta providing a distinctive and sympathetic answer to all the many interpretative questions which make this arguably the most problematic of standard symphonies"
(Gramophone on Symphony No 9)

Between 1976 and 1978, Zubin Mehta and the Israel Philharmonic Orchestra made recordings of the complete Schubert symphonies for Decca, as well as some of the incidental music for Rosamunde. Other than the Schumann symphonies, it was the only symphony cycle this tremendous Decca artist made for the label. The recordings were all made in the Mann Auditorium and were all produced by Ray Minshull, who, together with John Culshaw and Christopher Raeburn, worked extensively with Mehta during his exclusive Decca years. 29 April 2011 marks the 75th birthday of Zubin Mehta and this cycle is being issued as a homage to this great musician in his birthday year. In addition to the Rosamunde incidental music, Volume 2 contains the breezy Fifth symphony as well as the two C major works - Nos. 6 and 9, 'Little' and 'Great'.