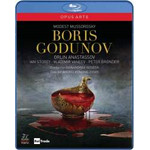 Boris Godunov is the story not only of a troubled leader but of an entire nation, and its history is as eventful as that of Mother Russia herself. In this new production, the legendary director Andrei Konchalovsky presents a personal vision of the opera that takes Mussorgsky's bare and monumental first version as its basis, while adding the final scene from the composer's revision, in which not only the Tsar but the people themselves reveal their fatal flaws.