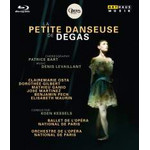 "An inspired and visually ravishing creation. This ballet deserves to go from success to success."
(recording of the Month MusicWeb Aug 2011)

"Denis Levaillant's interesting mix of tonal and atonal music - sometimes gleaming, diamond-hard and often favouring batteries of percussion, particularly xylophone and tubular bells - spans many styles from the baroque to modernism and jazy figures via Late Romanticism and Impressionism. An inspired and visually ravishing creation. This ballet deserves to go from success to success." (Recording of the Month MusicWeb Aug 2011)

Paris Opera Ballet Master and choreographer Patrice Bart plunges into the Opera's past and brings Degas' famous statuette to life. From the rehearsal rooms to the Cabaret du Chat Noir, the ballet conjures up a colourful era and the lively backstage world of a theatre.

The creation of La Petite Danseuse de Degas was the fruit of a long process dating back to 1997, when Martine Kahane, Head Curator and Director of the Paris Opera's cultural department, presented an exhibition on the tutu at the Palais Garnier. Not long after, the Musée d'Orsay contacted her and asked her to work with the Opera costume workshop to restore the tutu adorning Edgar Degas' famous statue. In the research that followed, she began to wonder about the identity of the model.

The investigation revealed that La Petite Danseuse aged fourteen had in fact been a certain Marie Van Goethem, the daughter of Belgian parents who had settled with their three daughters in a poor district of Paris. After the death of the father, the mother survived by enrolling the daughters at the Paris Opera Ballet School and by sending them to pose for artists in their studios.

Numerous exhibitions, books and films had already dedicated to Degas and dance, until then, no choreographic work had ever really done so. The project, entrusted to choreographer Patrice Bart and composer Denis Levaillant, took form around a central idea: to translate the intrinsic modernity of a 19th century story into music and the language of the stage. From a mere investigation, the ballet became a quest to recreate the imaginative world of classical dance through the works of Degas. The story was nothing less than the starting point for a wider exploration of the wings of the Paris Opera, a place infused with memories that do so much to evoke the troubling proximity between effort and performance, between the sublime and shameful, to which Degas' work remains the perfect testimony.