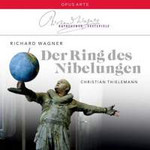 "The live recordings capture the grandeur and theatrical flair of Thielemann's approach very vividly. He's especially good in the big set pieces in Die Walküre and Götterdämmerung."
(The Guardian)

"Over the years Thielemann's Ring, like all his Wagner, has been a continuous work in progress. Throughout he now revels in the lightness and impressionism of, say, Karajan or even Clemens Krauss, mixed with a rather infectious sense of humour that, as in the score, is present even in the supposed heroics of the Valkyries' gathering or the forging of Nothung. This is, I suppose, a "fast" Ring, but Thielemann's through-line for each scene convinces irrespective of the stopwatch."
(Editor's Choice Gramophone Feb 2011)

"The live recordings capture the grandeur and theatrical flair of Thielemann's approach very vividly. He's especially good in the big set pieces in Die Walküre and Götterdämmerung."
(The Guardian)

"This is a big performance, often expansively paced. Great set-pieces like the Walküre love duet and the Rhone Journey have a fine soaring grandeur, even if some - the desperate Siegfried Act III prelude, the Funeral March - seem oddly detached and unemotional. ...Thielemann held me at least as well as my benchmark for modern Bayreuth, Barenboim - and with his energy and translucent textures, sometimes better. Linda Watson is a warm Brünnhilde... In Siegfried Stephen Gould delivers ringing, youthful tone powerfully enough to make strangulated top notes and short breath forgivable... As Wotan, Albert Dohmen's splendidly heroic delivery, commanding but tender, enhances his middleweight voice... Alberich is our superb character baritone Andrew Shore, unusually light-toned but fiercely incisive and nuanced."
(BBC Music)

Wagner's epic four-opera cycle is a work of extraordinary scale - a full performance takes place over four nights with a total playing time of approximately 15 hours. Based loosely on characters from the Norse sagas, it is a work that follows the struggles of gods, heroes, mythical creatures, and the eponymous magical Ring that grants dominion over the entire world. The music is richly textured, and grows in complexity as the cycle proceeds - Wagner wrote for an orchestra of gargantuan proportions, including a greatly enlarged brass section with new instruments invented especially for the work. The Bayreuth Festspielhaus was constructed for this work to be performed in, with a specially designed stage that allows singers voices to blend with the huge orchestra without straining - essential for such long performances.

'Whatever one's take on the production, Mr. Thielemann drew a probing, radiant and exhilarating musical performance from this orchestra of dedicated instrumentalists' New York Times

' … there is no doubt that this year's Ring at Bayreuth belongs to… Thielemann…[who] creates a musical experience epic in its scale and inexorable in its apocalyptic, shattering power.' The Guardian

Recorded live at the Bayreuth Festival in 2008, this production stars a host of international stars including Michelle Breedt, Albert Dohmen, Stephen Gould, Hans-Peter Konig, Linda Watson & Eva-Maria Westbroek. Christian Thielemann, one of the most sought-after conductors in the world, takes the baton with the Bayreuth Festival Chorus and Orchestra. This 14-disc CD box set marks the first ever Opus Arte CD release, and the start of an exciting new direction for the company.