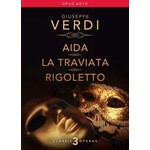 This inimitable collection unites three masterworks by the Italian operatic giant Giuseppe Verdi in a five-DVD set that is essential viewing for enthusiasts and newcomers alike. Internationally acclaimed stars perform the title roles, with a combination of lavish costume design and magical staging characterising these celebrated productions from three of the world's greatest opera houses. Extra features include the BBC documentary Verdi through the Looking Glass. NB individual titles will remain available at full-price.

"José Antonio Gutiérrez's production is, by definition, ultra-traditional, but everything looks beautiful thanks to Cabanes's feeling for colour - ochres and blues dominate - and perspective. Cabanes… achieved breathtaking atmosphere through trompe-l'oeil effects painted on paper. It's for his designs that this DVD is really worth having, though they house a fine performance under the secure baton of Miguel Ángel Gómez Martínez. Daniela Dessì is strong if occasionally strident in the title role, and Elisabetta Fiorillo is a commanding Amneris." (BBC Music on Aida)

"Pier Luigi Pizzi's updating of Traviata to occupied Paris… might seem gratuitous, but because of his skill as designer and his experience in directing singers, the new milieu hardly ever interferes… with the central tragedy of Violetta's plight. That owes much to the freshness and immediacy of Norah Amsellem. From Violetta's first fevered entry to her agonising death, she is totally absorbed, acting and singing with the most eloquent feeling. López-Cobos conducts an interpretation notable for yielding support of his singers combined with dramatic dash, and the Madrid orchestra play as though their lives depended on the results. Its preservation on DVD is welcome." Gramophone on Traviata

"McVicar's engrossing and perceptive production of Rigoletto at Covent Garden caused something of a stir because of the frank licentiousness of the opening scene, including sex of all varieties. It is a bold and sensational beginning...At its centre is the arresting portrayal of Rigoletto from Paolo Gavanelli...Christine Schäfer's Gilda...is particularly moving in the final act." Gramophone on Rigoletto