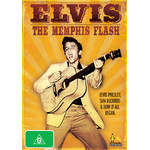 There are a great many discoveries to be made about Elvis Aaron Presley before he became known to the world as The King of Rock 'n' Roll.

Way back in 1953 a fresh-faced 19 year-old visited the Memphis Recording Service to record a couple of tracks as a present for his beloved mother and set about the most invigorating transformation of modern music in history. An extra copy of those recordings, listened to by manager Sam Phillips prompted the recommendation of the promising young "ballad singer" to Sun session guitarist Scotty Moore, providing the first great opportunity for one of the most original and talented musicians to step up to the mike and strut his stuff.

Featuring music from those pivotal sessions and fascinating contributions from many who were there at the time, 'The Memphis Flash' is a rare insight into the birth of a musical enigma and the establishment of a new and exciting sound that would revolutionise the airwaves for decades to come.