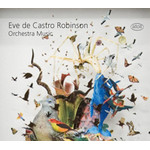 Eve de Castro-Robinson crafts her material like a musical sculptor. Intensity, whimsy, poetry, theatricality and unpredictability are heard in her music, which ranges from these large scale orchestral canvasses to intimate solos, vocal and electroacoustic work.

Releasing the Angel for cello and orchestra is the opening work on the CD, which also includes Peregrinations for piano and orchestra, Other echoes, These arms to hold you for children's voices and orchestra, and Len Dances.

Eve's characterful music is expertly realised by the New Zealand Symphony Orchestra conducted by Kenneth Young with soloists David Chickering (Releasing the Angel), and Tzenka Dianova, piano with Vesa-Matti Leppānen, violin (Peregrinations). The Lyrica Choir of Kelburn School perform These arms to hold you, which is set to words by Bill Manhire.