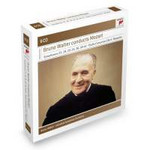 Born in Berlin in 1876, Bruno Walter entered the Stern Conservatory at the age of eight, intending to become a concert pianist, and made his conducting debut in Cologne at 17. Following appointments in Pressburg (now Bratislava), Riga and Berlin, he went to Vienna as assistant to Mahler, whose works he later championed, giving the premieres of Das Lied von der Erde and the Ninth Symphony after the composer's death. Important positions in Munich and Berlin - as well as guest appearances in Salzburg, London, Amsterdam, Paris, New York, Moscow and elsewhere - brought him worldwide fame by the 1920s. After the Nazis drove him from Germany in 1933 and Austria in 1938, he settled in the United States, where he worked with several leading musical organisations, most notably the New York Philharmonic. He was, and through his many recordings still is, widely admired for his skilful use of rubato, sensitivity to structure and textural details, dramatic intensity and, perhaps most of all, the genial lyricism of his performances.